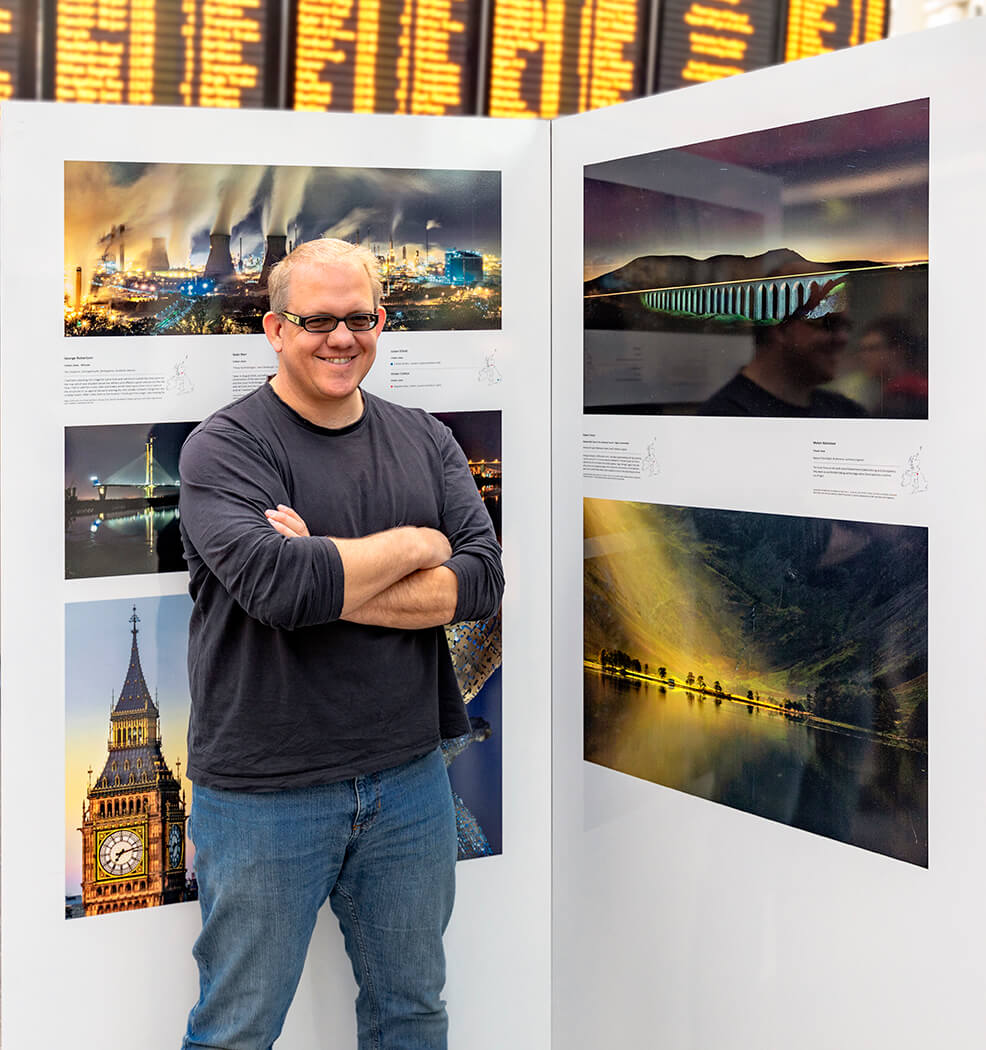 In October last year, I was delighted to have been informed that I had two images ‘Commended’ in the UK’s most prestigious landscape photography competition as run by one of the world’s most prolific landscape photographers, Charlie Waite, the Take-a-View Landscape Photographer of the Year. After three years of submitting images, to have an image or two accepted from the 18,000 entered every year, is a huge feat in itself and one that I was very happy to have finally achieved.

The competition also has an hard cover book printed showcasing all of the successful images which roughly amounts to around 150 a year.

There is also a national exhibition of just some of the 150 images entered into the book and it tours around the various train stations in the UK as one of the main sponsors of the competition is Network Rail. For the next couple of weeks (until 5th May 2018) it is being featured at Manchester’s Piccadilly train station (see below for the dates and locations that the exhibition will be touring at). Seeing that it was in Manchester, I decided to pay it a visit on Thursday with a couple of friends including good friend and Take-a-View’s LPOTY 2016-17 ‘Your View’ Category Winner Tony Higginson (Shifting Sands, Silverdale, Lancasshire)

There were around fifty five photographs on display and I have to confess to being seriously impressed with the very high standard of them on show. I would say that they represented the best display of photographs I have seen in any Take-a-View LPOTY exhibition in recent years. I was very pleased to have one of my Commended images on show (Nature’s Torchlight, Buttermere, Lake District).

Here are some photos that I took of the exhibition. We’ll start with the overall winner of the Take-a-View Landscape Photographer of the Year Benjamin Graham and his ‘Diminutive Dune, West Wittering, West Sussex’ image. This image won Benjamin £10,000 and the UK’s most coveted title in landscape photography. I have to confess to being more impressed with the image once I had seen the print up close for a lot of detail cannot be appreciated until you see it in the flesh. A HUGE well done to Benjamin on his success and looking back at Benjamin’s success in recent competitions, perhaps it was only a matter of time until he struck gold.

Other images that impressed me were Rachael Talibart’s stunning ‘Fire Within, Birling Gap, East Sussex, England’ which won the Classic View Category.

Rachael also had a gorgeous image of some rust Commended in the ‘Your View’ Category entitled ‘Perigee, Rust detail of sea defences, Seaford, East Sussex, England’. Paul Sansome and his gorgeous capture ‘Wensleydale, Yorkshire Dales, North Yorkshire, England’ is featured next to Rachael’s.

Mark Cornick’s ‘FujiFilm Print Prize’ in the Urban Category image entitled ‘Architectural Detail, London, England’ was one of my favourites too. An absolutely stunning capture.

All in all, this is a superb exhibition and one that should have people take a lot of inspiration from the photographs shown. Get yourself down to Manchester Piccadilly train station before the 5th May 2018 and spend a very enjoyable hour or two at your leisure.