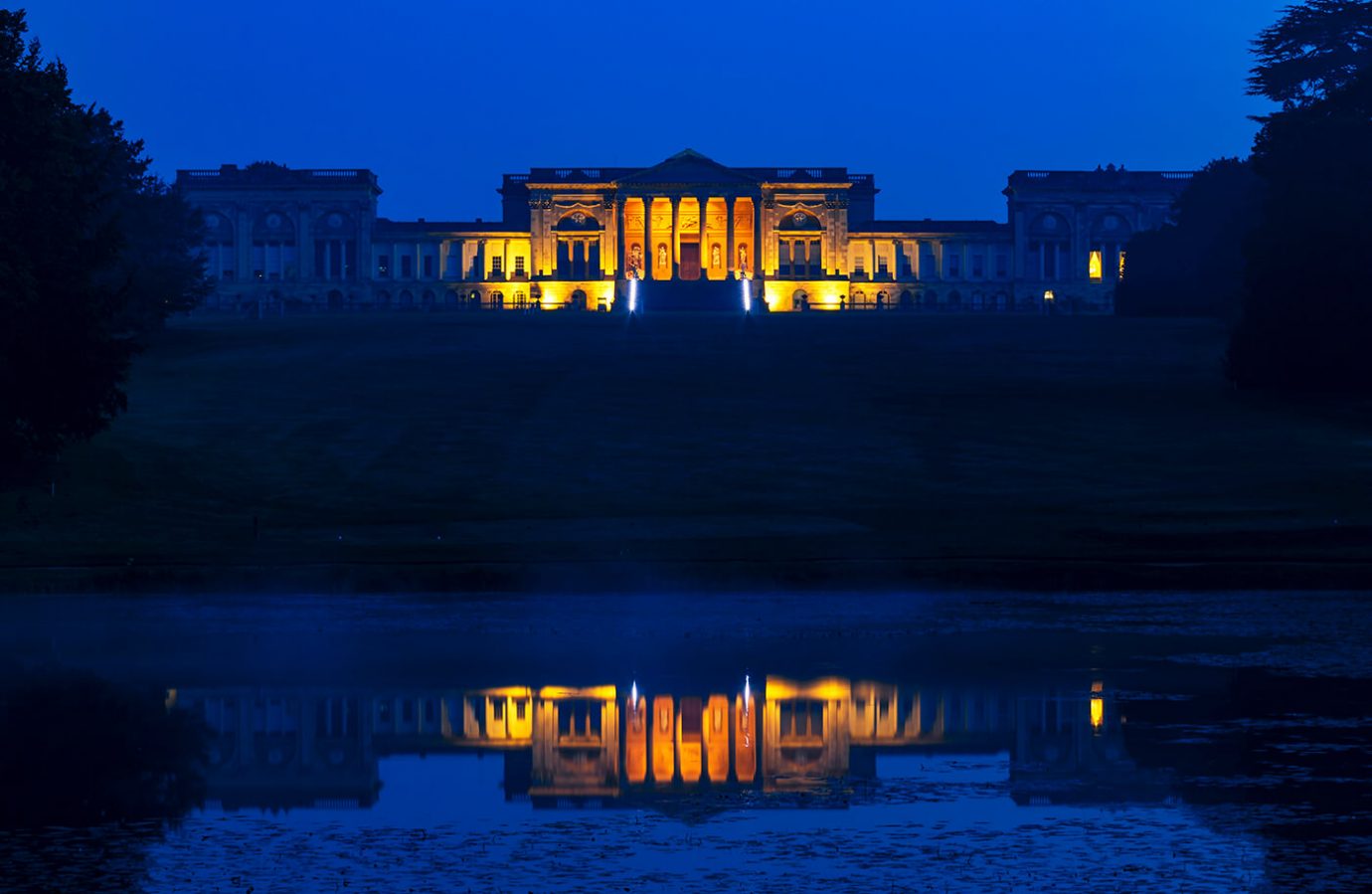 I was contacted by John Emmett, one of the members of Culworth Camera Club down in Northamptonshire a few months ago and asked if I would be interested in presenting a lecture on a Friday evening followed by a workshop the next day at Stowe National Trust. I was definitely interested and a date was set for the 31st August and 1st September 2018. John arranged to have someone open up the grounds especially for us pre-dawn to allow us an opportunity to photograph the gardens and the exterior of Stowe House in private until 10am, after which we would share the place with members of the general public.

The lecture went very well on the Friday evening and almost fifty people attended, many who were not members of the club but had travelled far and wide to hear me speak (I can only hope that they were not disappointed). The evening finished by 10.30pm and I was in bed by midnight. The alarm clock sounded at 3.30am and up I rose, loaded the minibus with my photography equipment, and collected the eight members of Culworth Camera Club that had signed up to spend the day with me. Incidentally I did visit Stowe National Trust the day before with John to spend a couple of hours scouting out the place for perfect vantage points the following day (I like to be thoroughly prepared before I run a workshop).

We drove the twenty minute journey to Stowe NT and was met by Scott Parker, Stowe NT’s Commercial Operations Manager at 4.45am. He very kindly offered to open up, and meet us by the visitor centre complete with three electric buggies, so that we could quickly get on location and start photographing the beautiful scenery. We had the buggies until 12pm and they were fantastic. They made our morning so much more enjoyable and certainly a hell of a lot easier in getting around. Less time walking meant more time behind the camera. Scott even volunteered to drive the pickup electric buggy all morning so that he could transport all of our camera equipment around. Scott could not have done more for us. He was absolutely fantastic and a really nice guy to boot. Scott made our visit extra special for that I would like to personally thank him publicly for all his dedication, commitment and professionalism. If only more companies had people like Scott.

We started our morning stood by the water’s edge of the Octagon Lake, looking across at the majesty of Stowe House, all lit up and set against a deep blue sky that you only see around an hour before sunrise. The reflections of the house in the lake were magical.

The mist started rolling in and was covering all low level land. Behind us in the distance, the Corinthian Arch that stands near the entrance to the estate looked eery with the mist swirling around it. The sheep decided to photo bomb the scene and were busy eating breakfast themselves. I set up the shot to include the furthest left sheep smack bang in the middle of the arch and the rest of the sheep eventually fell into place. I love this photo.

As we were setting up to capture the hauntingly beautiful Gothic Temple (which is actually a three bedroom house that you can rent and stay in as a visitor), Scott informed us that the Kennel Master would soon be walking his beagle dogs and that there would be quite a number of them. Ten minutes later, he arrived with said dogs in tow. You had to be incredibly quick to set up the camera in order to capture him and them and the dogs were so excited to see us as the place is normally devoid of visitors until mid-morning. They certainly were a real treat to see. It turns out that Stowe House is one of only three schools in the UK that still kennel their own packs: Eton and Radley being the other two.

Once the furore of the dogs had passed, our thoughts quickly turned back to the Gothic Temple and a quick re-position a little further up the water’s edge of Octagon Lake had us capture the spooky looking building as the mist filled the air.

A few minutes later, the sun rose and lit up its red brickwork. The reflections were lovely in the calm water in front of me.

Breakfast time arrived at 8am and we did not need asking to board our buggies and head to the visitor centre where the wonderful female chef had arrived an hour early to serve us all with full cooked English breakfasts. Boy did it taste great. Scott even took our plates away to the kitchen. Honestly, the whole team could not have done anymore for us. I am very impressed indeed but it was time to venture back out and photograph the Gothic Temple all lit up by the morning sun and we had around ninety minutes left before the general public would visit to see the beautiful views for themselves.

Scott took us to his favourite place on the estate and that was the Grotto. A man-made small cave that you could walk into and look out over the open arched window over a river. There was a fountain inside up against the back wall and some wonderful textures in the stone that lined the cave. It was lovely and cool inside and a refreshing change from the warmth outside due to the blue skies and beating sun.

After the Grotto, we visited the impressive Temple of Concord and Victory, a lovely building that resided behind Stowe House. Set in the Grecian Valley (which was to have become filled in with water at some point but the land would not hold it in) the building has some wonderful views The pillars made for a great pattern shot while the entrance complete with its faded blue doors and green seated benches outside had us all reaching for our cameras.

Our final location before heading home was the beautiful Temple of British Worthies which nestled on the bank of the water and offered up limited reflection shots due to the excess plant life that occupied the water. Pam was down by the water’s edge and complimented the composition so I took a quick photo of her in action. I knew instantly that I would convert the image into infrared using Photoshop CC and as it happens, I think it suits the scene rather well. What do you think?

So that is my workshop at Stowe National Trust in a nutshell. HUGE thanks to John Emmett for all of his hard work in organising the workshop on my behalf, to Scott Parker for his tireless work and energy in assisting us on the morning. He is most definitely the real treasure of the National Trust at Stowe and to Carol, Carrie, Christine, Pam, Colin, Chris, John and Norman for attending the workshop. Their company really made for a fantastic workshop and I had such a wonderful time at Stowe. Many thanks also to all those who attended my talk the evening before. It was a real pleasure in meeting you all and I appreciate the support shown in buying a ticket and showing up to listen to me. Thank you.

To finish this blog, here is a selection of images captured on my Huawei P20 Pro mobile phone (10mp and JPEG setting only, not the 40mp and raw option).