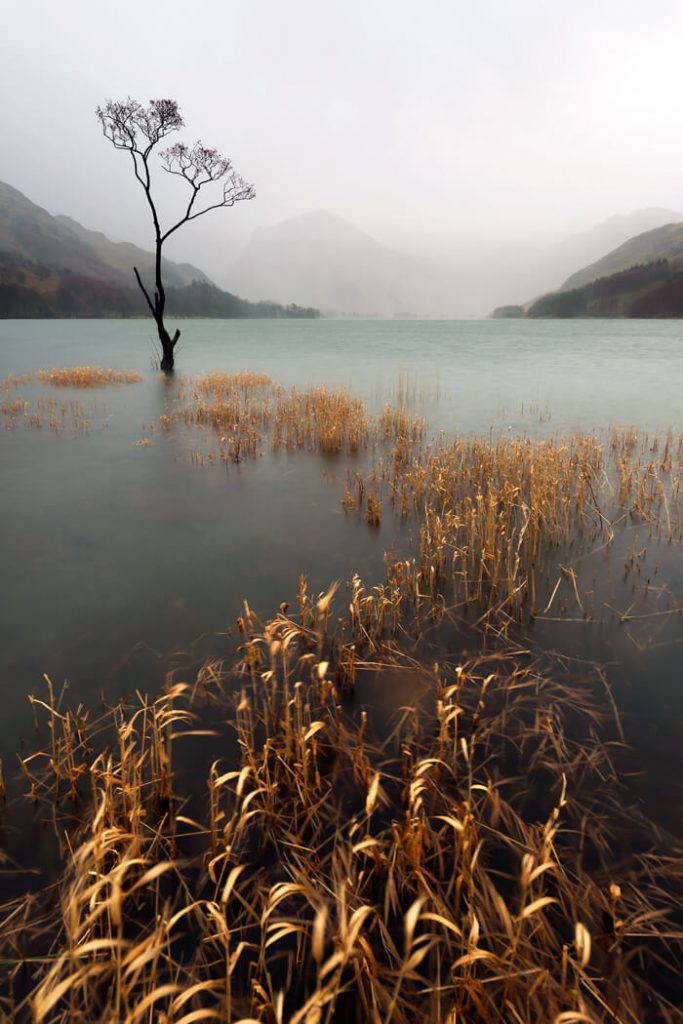 A Crisis of Conscience. As photographers, most of us will face at some point in our lives a moral dilemma. To shoot or not to shoot. That is the question. My story below details the struggle that I had with my moral compass as to whether to photograph the flood-stricken county of Cumbria only days after they suffered their worst floods to date in December 2015. I hope it resonates with you as perhaps you have found yourself in a similar situation.

Page 39 in the April 2020 Digital Camera magazine shows an image of my ‘Cumbrian Floods, Buttermere, Lake District’ image showcasing the iconic Buttermere tree surrounded by high flood water. The image was used to promote this year’s most prestigious landscape photography competition, the Take-A-View Landscape Photography of the Year.

I entered the image into the ‘Classic View’ category in the 2017 competition, for which it achieved a ‘Commended’ award. In seeing it in print once again, I thought that it might be an idea to briefly explain a little about how I captured the image as well as the back story around it. I hope you enjoy reading all about it.

This photo was taken on Thursday 10th December 2015, exactly five days after the terrible floods that devastated so much of Cumbria. The story actually starts five days before, on the morning of Saturday 5th December 2015. I, along with a couple of good friends of mine, decided to attend Steve Gosling’s ‘Travelling Light’ photographic exhibition which was taking place at the beautiful Theatre by the Lake, located by the shoreline of Derwentwater in Keswick in the Lake District.

On driving into Keswick, the local River Greta that runs through the town was absolutely raging. It was close to breaking its banks and I had never seen so much water pounding through the river before. On arriving at the theatre, I walked down to the landing stages where the large passenger boats would normally be tied up. Due to the sheer amount of rain that had constantly fallen for days beforehand, the boats had been relocated to safety elsewhere. The height of the lake water was up and over the tops of the pier posts. I was amazed at the sheer volume of water present.

We headed on into the theatre and enjoyed listening to Steve present his lecture in which he explained his thoughts about selecting his images for his exhibition. We settled down and enjoyed the talk, until about one hour in, when one of the theatre staff interrupted Steve to advise all those who did not live locally to leave Keswick as quickly as possible as the Police were closing the roads in the town within thirty minutes. We promptly left after saying our goodbyes. Driving out of Keswick I noticed three dozen 18″ high glass panels that were permanently positioned on top of the stone wall along High Hill, one of the main roads out of town. I had always wondered what those glass panels were for and now I knew, it was to hold back the river water should it rise high enough to breach the stone wall. The water was sloshing up against the glass as it powered down the river, it was like looking into a dirty aquarium tank.

I returned home two hours later, having navigated huge amounts of water on the roads. All the news channels were showing footage and photos of the floods and this went on for days. Seeing people being flooded out of their homes and businesses being forced to close was heartbreaking. Roads collapsed, bridges too. Sadly, Police Officer PC Bill Barker lost his life when the Northside Bridge in Workington collapsed. It was horrendous, Devastation on this level had not been seen in Cumbria before, even during previous floods. I had never seen the Lake District this badly affected nor the sheer number of people who suffered as a consequence. An unprecedented 341.4mm (13.44″) of rain fell in just 24 hours. According to the Met Office, the record still stands today for the highest amount of rain in a 24 hour period in the UK.

As I sat at home during the following few days, I watched as events unfolded. I felt sad for those who were suffering and yet there was also a part of me as a landscape photographer, which wanted to be in the Lake District to see it for myself and to witness and record the impact that the flooding was having on the landscape. I certainly felt an inner conflict because on the one hand, the area I love so much was going through such challenging times, but I also had this strong desire to document the landscape not only when it looks at its best, but also at its worst too. I wrestled with my conscience for days trying to decide whether or not I should visit once the roads had reopened, the water levels dropped and that I was not going to be a risk to the emergency services who were incredibly busy helping people. I eventually made the decision to head up to Buttermere five days after the floods. I had a friend join me and we decided to park up in Buttermere and wander down to the lone tree.

I was amazed at how high the water was even five days after the initial flooding. The whole scene looked ill at ease with the tree surrounded by water and the shorelines yellow grasses standing proud out of the water. I just stood there looking out over the water while the sky became heavy laden with the threat of even more rain. I paced back and forth for a few minutes trying to find a composition that worked but it was very difficult to settle on one. My main consideration was that I did not want to walk into deep water and so I was somewhat limited in where I could stand. Eventually I settled on a composition, set up the tripod and camera and just as I was about to click the shutter button, the rain arrived.

I made the decision there and then to continue shooting while my friend sensibly took shelter under a nearby tree. My camera was unprotected, I had no rain covers or shower caps to throw over it, so I fired off a few shots while the rain fell. The low-lying clouds in the distance rolled in and practically hid Fleetwith Pike and Haystacks, allowing the tree to stand dominantly in the foreground. This is a tall but incredibly slender tree and it looks graceful at the best of times, but it has to compete with the 2,200ft fells in the distance. On this particular day, it did not. Once I had the image on camera, I retreated under the cover of the nearby tree and pondered the scene that stood in front of me. The image that I had just captured would be one that I hoped I would never be available to photograph again as the thought of the Lake District flooding to that extent in the future really hit home to me.

So for many reasons, whenever I look at this image, I am reminded of a time when the best of the human spirit came together in the face of such difficult times.

P.S. The deadline to enter the Landscape Photographer of the Year competition has been extended to the 10th May 2020.