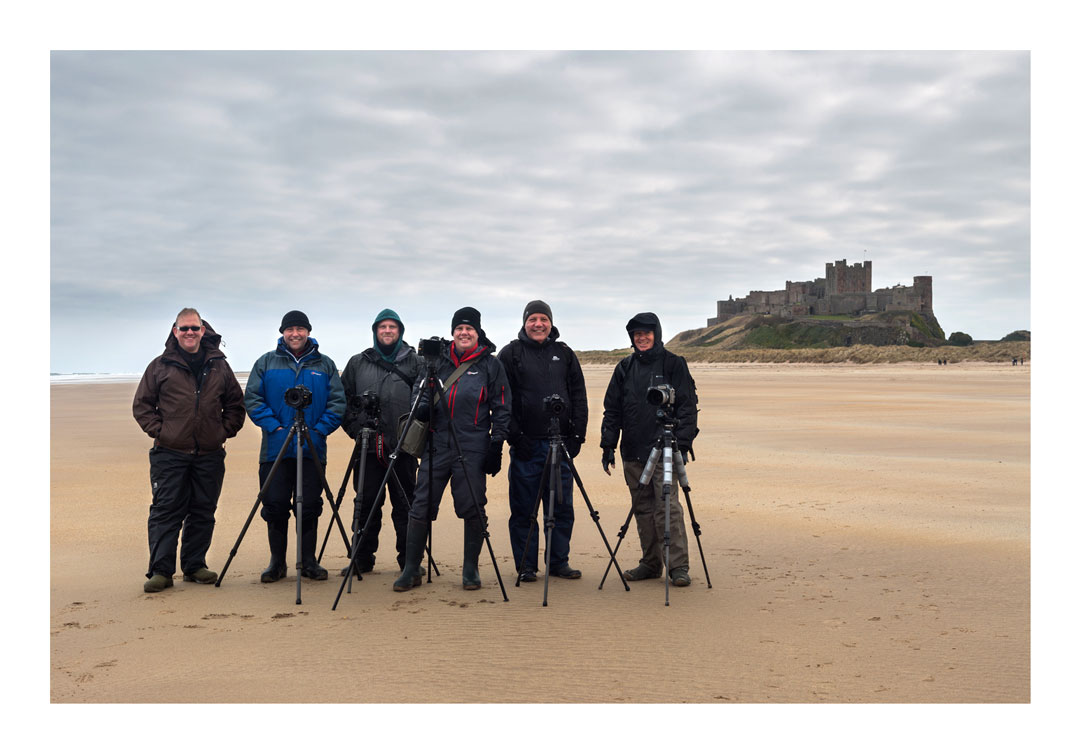 The Volvo estate was crammed with so much stuff that I wondered whether we were moving to Bamburgh rather than heading there to run two back to back landscape photography workshops. There was the laptop, projector and projector screen (for image reviews and post-processing sessions at night) along with all the extra bits and bobs I take along just in case! Of course Tony Higginson also had all of his things with him too, although to be fair we never do end up finding time for a game of chess! Tony joins me on many of my workshops, as I find that having two workshop leaders present allows me plenty of time to give 1-2-1 tuition. Also he has been known to cook a mean breakfast.

The image above is Cullernose Point which is a wonderful sloping headland that gently rolls down into the sea. Part way through our visit the local RAF helicopter showed up and proceeded to spend the next thirty minutes hovering above the Bathing House at Howick while occasionally circling above us for good measure. No doubt it was keeping an eye out for us, but we were all in spot safe from the large crashing waves. They appeared to be on a training exercise but it gave me an excellent opportunity to photograph Tony and my clients with the helicopter in the background. I shot the scene using a Canon 70-200mm at 176mm to enable me to compress the scene allowing for the helicopter to play more of a dominant role.

Cullernose Point also has some stunning textured boulders. The shots below are a series of three close up images of these beach boulders. The addition of isolated orange coloured rocks and the odd bit of sea kelp really adds to the composition. They were all shot handheld on a Canon 5D MKIII and a Canon 50mm f1.8 lens.

Holy Island is a wonderful location to visit and is accessible across a causeway which is cut off twice a day during high tide which covers the road. We timed it perfectly, getting across the causeway at 7.30am for four hours of peace and quiet before the causeway opened again at 11.30am after which a flood of tourists invaded like a swarm of bees. The opportunity to photograph the island completely uninterrupted by visitors on a Sunday morning was indeed heaven sent. The iconic upturned boat huts are naturally one of the star attractions and despite every man and his dog having photographed them that still does not deter me from creating my own personal take on the scene.

The light was harsh with so few clouds in the sky to mask the sun. However you can use the harsh light to shoot a different kind of image, one that you would otherwise be unable to create. One of the skills as a landscape photographer is to use the weather and lighting to create the best images possible at that time. When life gives you lemons, make lemonade my Gran once said. Holy Island comes alive during high tide as the water laps around the old pier remains allowing you to capture some atmospheric and eerie images. Old concrete piers come into their own with the water moving around them allowing for some interesting images to be taken.

The most impressive viewpoint of Holy Island has to be Lindisfarne Castle and quite rightly so. I love castles, and Lindisfarne Castle is to my mind one of the best looking in the UK. It is perched high up on a large volcanic rock, and with a very distinctive shape. It embodies all that I love about British castles. That feeling of impenetrability while enjoying some mighty fine views from its lofty position. It’s a huge draw to those who visit the island, and thanks tothe National Trust I’m confident it will be maintained for many generations to come.

Cocklawburn Beach is also a great location that we visit. The limestone block pavements protrude through the incoming tide which has them stand proud and very visible. There is some amazing geology to photograph on the beach, and a decent study tripod is essential if you’re after capturing some long exposure images without shakiness or blurriness creeping in.

Another iconic location for photographers to shoot is the almost 700 yr old Dunstanburgh Castle from the smooth boulder bay of Embleton. A swift twenty minute walk and we’re stood in the water in our wellies. Long exposure images are very popular here as they help to create the smooth motion of the water therefore creating a kind of ghostly look to the compositions.

Personally I am starting to shy away from very long exposures of thirty seconds or more and often opt for my LEE Little Stopper six stop filter to give me an exposure time of just a couple of seconds or so, therefore maintaining a certain amount of detail in the water. This place looks great at either sunrise or sunset and Saddle Rock is a great place to stand on top of if you want an elevated position to capture the castle and cliffs. The castle does not hog all the limelight though because the beach itself is beautiful in its own right. Miles and miles of beautiful golden sandy beaches surround you and foam is generated and deposited on the shoreline looking like miniature icebergs (I have an over active imagination, clearly). Towards the last throws of light, a surfer arrived to ride the waves and entertained us for a few minutes proving once again that there’s always an alternative subject to shoot as well as the classic vistas.

The gentle walk from Craster to Dunstanburgh Castle is a must, and as we ventured slowly up the coast, the mist rolled in and out. As quickly as it arrived, it disappeared again. This low lying cloud beautifully subdued the piercing sun which created a stunning soft light that muted the colours around us. Half way along we reached a wonderful horseshoe shaped section of rocks which allows the incoming tide to crash in and around until it fills the elevated and exposed rock pool. That’s one of the things that I love about the coastline, there’s always a different scene showing itself to you. The coastline is a living, breathing entity and it’s no wonder seascapes are such a favourite subject among photographers.

But perhaps the most famous location in Northumberland is Bamburgh Castle. This is a location that never fails to provide a quality image or two regardless of the weather. We experienced both lovely light and heavy mist on the two occasions we visited it. This is a great location because the geology of the rocks are perhaps the most different from all of the locations we shoot at. It’s a wonderful place that allows for macro work, long lens images and wide angle shots. There are numerous rock pools that make great foreground subjects, the detail and patterns in the rocks are never ending and the colours are stunning. There are several large five foot high square concrete blocks that line the sand dunes, two of which have been painted to look like dices. The sand dunes also look beautiful in the soft, warm light of a sunrise or sunset. Bamburgh is genuinely such a magical place.

To finish the week off, there was a solar eclipse taking place just before we left Northumberland. Positioning ourselves in the car park of the cottage, we set up placing ten stop filters over the lenses as we watched the moon slowly move itself across the sun until only a sliver was visible. The available light that fell on the scenery around us was strange, soft and gentle with shadows almost disappearing, yet the scenery looked flat and lifeless. The sun plays such a huge part in landscape photography that you soon notice it when it disappears behind the moon.

When all said and done, the locations are only one part of the workshop. For me it is the people who chose to share their time with me that leave the biggest memories. The hilarious stories told over an evening meal, the many smiles and laughter that I saw and heard during those seven days and the real joy and appreciation from those who received tuition and assistance from me and Tony genuinely fill me with so much happiness. That is the real reason why I do what I do. The reason why I have now dedicated my life to landscape photography is because of the joy I receive in helping all the people who want to produce better quality images while enjoying their photography even more.

I am very blessed indeed. Until next time, continued happy shooting and smiling.