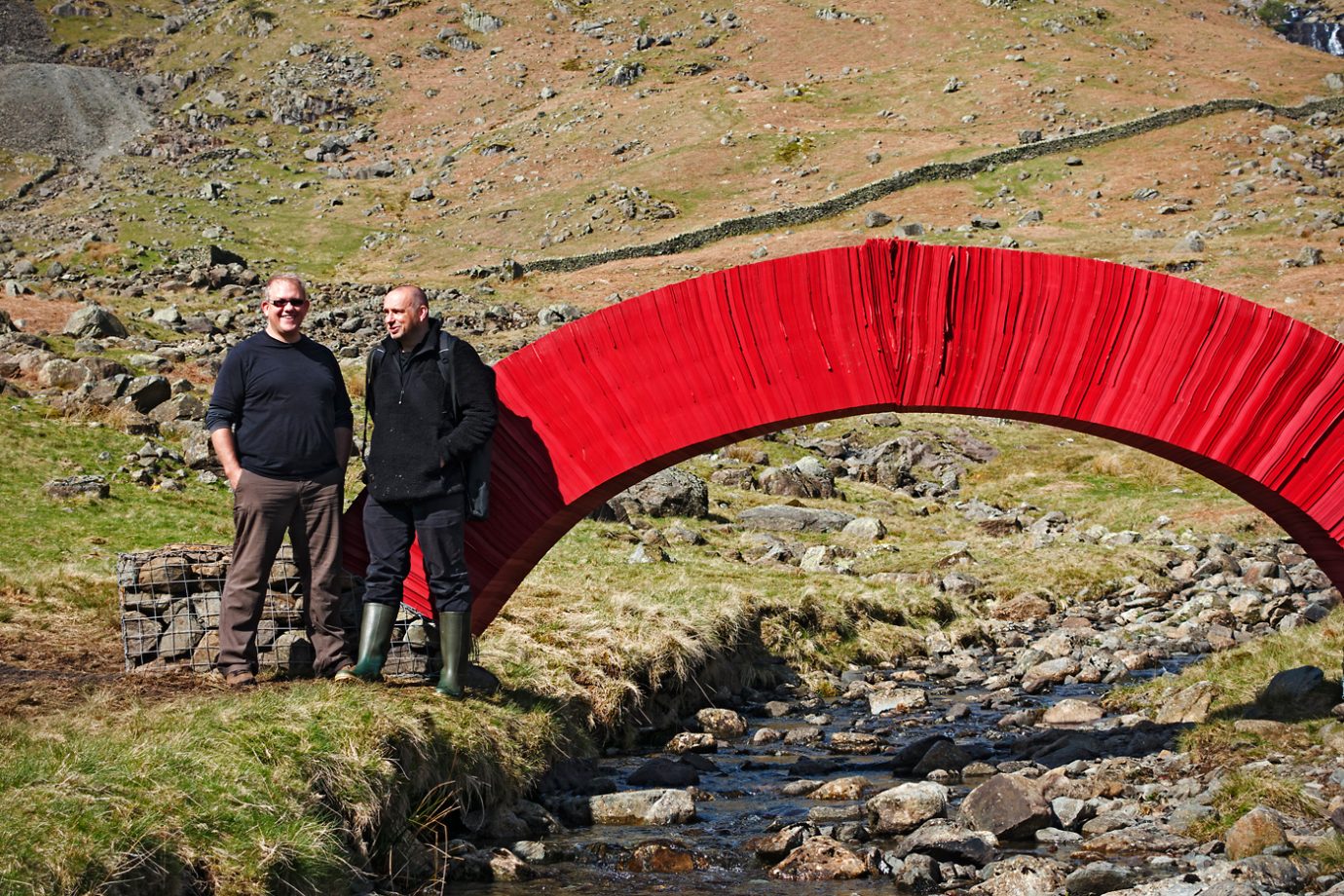 I discovered earlier in the week on Facebook, a photo that someone had posted that showed a packhorse bridge that had been created out of 22,000 sheets of red paper which was located over a beck in the Lake District. I was curious. I did some digging.

I love discovering something unusual, something that creates a bit of a stir or a lot of interest and this bridge did both for me. The PaperBridge is a temporary art installation by Steve Messam, who is an internationally known environmental artist. He has spent the best part of four years on and off trying to get this art piece located into the Lake District. The bridge is only in residence for one week  (it is being dismantled Tuesday 19th May) so I along with a friend of mine Mick, decided to venture up to Patterdale early yesterday morning (Fri 15th May) and walk the two miles along the beck and up the Grisedale Valley to see the bridge for myself.

We arrived in Patterdale for 8.15am and spent nearly 45 minutes walking on the well trodden path with Helvellyn in sight ahead of us. Eventually we saw the bright red bridge in the distance and after negotiating a small boggy area of land, we approached it. There were four people milling around already with many more arriving behind us. It was difficult to find a moment to capture the bridge without anyone in shot but we managed it after twenty minutes or so.

But to our surprise, Steve Messam was present, looking over his bridge to make sure all was well. The sun was beaming down on us, blue skies overhead and all was well in the world. Steve had been interviewed on The One Show (BBC1) the night before and decided to venture up from London overnight. It was a real pleasure chatting with Steve over his reasons for wanting to create this art work as well as experiencing the bridge for myself. Having watched a lot of other people clamber up it carefully, I decided that it was my turn. I was amazed to discover that the bridge sways noticeably when stood on top of it so if you do not possess a pair of sea legs or get easily unbalanced, I would not venture up it.

Some interesting facts about the bridge for you. It was made from 22,000 sheets of bright red paper and was made from a single piece of paper before being cut up. The length of the sheets of paper totals ten miles. The paper will be recycled after the bridge is dismantled next week and the dye is colourfast, meaning that no colour will run from the paper and into the water, even when raining. The gabions (the bridge’s base at either end) were created using three tonnes of rock from the river bed bridge was built using no glue, bolts and structural fixings whatsoever. Very impressive indeed.

As the morning wore on, many more people arrived including a large group of schoolchildren who had made the trip from Patterdale School. It was great to see them climbing all over the bridge and having their photos taken. In this age of overzealous health and safety and a fear of allowing children to play and enjoy themselves without leading to injury, it was refreshing to see a sensible approach being taken. Of course the children were supervised at all times. Steve became more and more swamped by people wanting to discuss his PaperBridge but time was running short and he left with the farm manager and Mick and I decided to head back ourselves. I was more than happy that I got to meet the man who had inspired a lot of people to walk the four mile round trip to see his work. If only the bridge could remain forever.