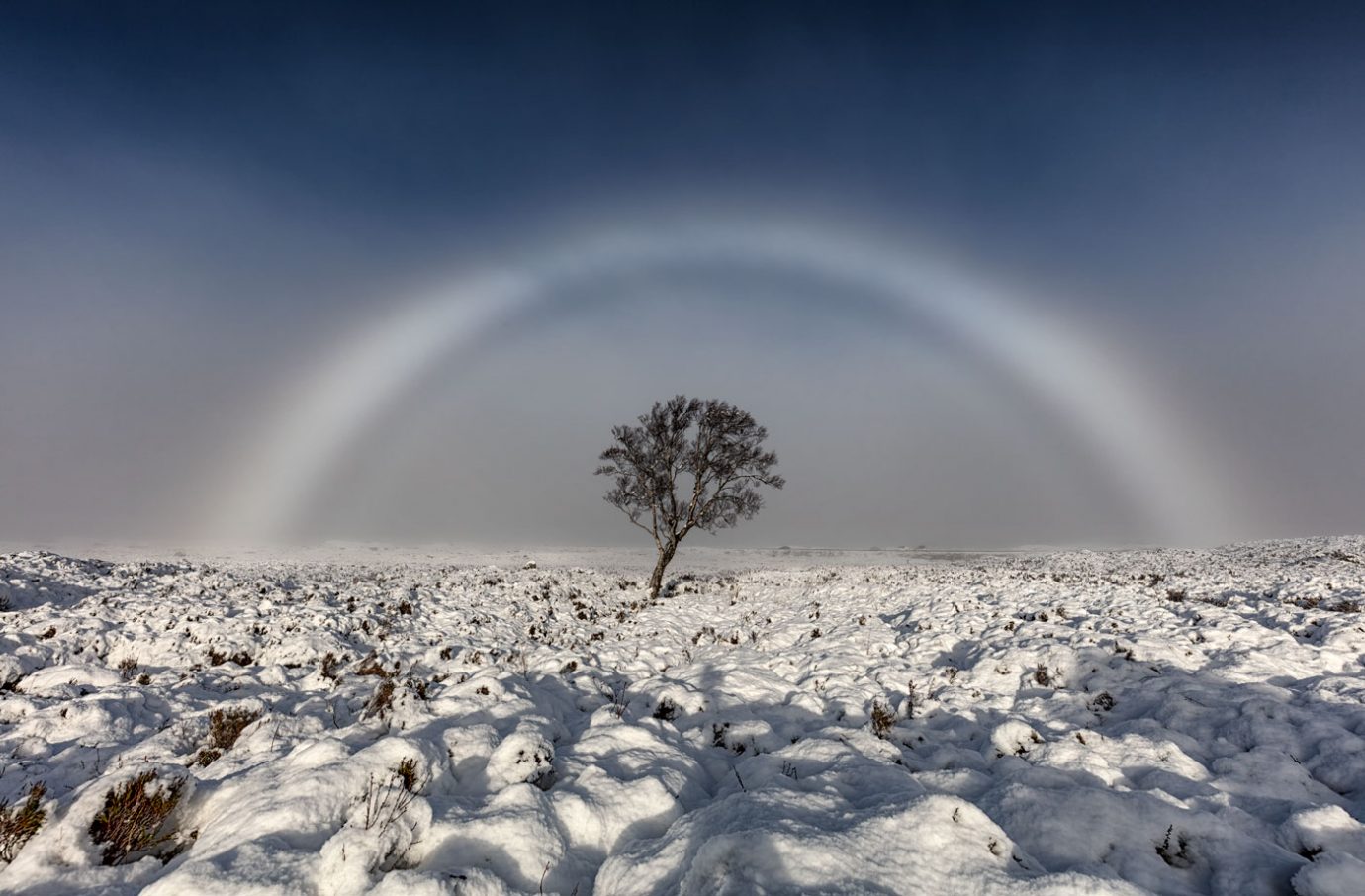 Finally the dust is settling, the phone is ringing a little less than it did last week and even less than the week before and I am able to respond to my emails in a timely fashion. Who would have thought a single image could have such a huge impact on a person’s life? Not me that’s for sure.

For those of you who are not aware of the story, I photographed quite a rare weather phenomenon called fogbow, on the beautiful Rannoch Moor in Scotland on Sunday 20th November 2016. I was out with a fellow photographer shooting Loch Tulla in the morning but the light wasn’t inspiring enough to continue so on the advice of my fellow shooter, we ventured to this wonderful little lone tree on Rannoch Moor a few miles up the road. The scene was stunning, and I mean truly stunning and on the mist was so heavy that only the tree could be seen. We ventured over to it, set up, said hello to a couple of photographers who were already there and I began to set about composing the tree within the mist and snow. Shortly afterwards a colourless rainbow started to appear as the sun started to burn off the mist. Once I had seen the fogbow, I dashed round the other side of the tree with the sun positioned behind me and the fogbow was there in all its glory. I could not believe just how beautiful it looked and yet I did not know exactly what I was looking at. It would turn out that the majority of those I have spoken to also did not know that fogbows existed.

I quickly composed the camera ensuring that the tree was centrally located under the fogbow followed by a quick mental checklist that I had all the technical aspects of the camera correct. ISO? check. Aperture? check. Exposure? check. Focused? check. Shutter button. Click. I ensured that everyone was out of shot before capturing a single frame that had nobody in it as well as a full fogbow and within seconds, quite literally, the fogbow started to disappear. Call it luck, call it quick thinking, call it whatever you like, the shot was in the can. I like to think that all the planets aligned that day and if you only knew just how close you come time after time after time over the years what with rising out of bed at 3am, travel a hundred miles sometimes just to be in with a shout of a great sunrise, you learn to appreciate moments like these because as in this case, it is a ‘once in a lifetime’ moment.

Within a couple of hours or so of taking the photograph, I returned to the hotel and set about editing the image before releasing it on social media and while it gained some traction that evening, I went to bed content with a good afternoon’s shooting. The next morning and 6am arrived and I awoke and decided to get ready and head out for sunrise. I saw a message on Chris Evan’s Radio Two Breakfast Show Facebook page asking why was you up and about at such un ungodly hour. I wrote that I was heading out to capture sunrise but that I had photographed a fogbow the day before and I left my Facebook URL on his page. Chris then decided to mention it on his show not long after it started with a discussion about fogbows and why had he never heard of them. It turned out that an awful lot of people had also never heard of a fogbow (me included until the day before). Three hours later, Jo Riley from www.bavmedia.com contacted me asking if I had a representative that could market the photograph to the national press. As it happens I did not and within minutes, we agreed that she and her business partner Geoff Robinson could do so. Hours later my world turned upside down.

Emails started to flood in from TV stations, weather channels, websites, blog sites, national and international newspapers and magazines all asking if they could run the story. I was bemused and thankful that I had Jo and Geoff in my corner to refer everybody towards them. By the Tuesday I had to leave my waterfall location that I had arrived at early in the morning to return to the hotel to field calls from Radio Five Live, and a couple of news stations in New York (ABC News being one of them). Phone interviews were given and Fogbow was well on its way around the world. Thankfully my four-day workshop in Glencoe did not start until the Wednesday evening which just about gave me enough time to comprehend the magnitude of what was happening and to say that I was overwhelmed is an understatement.

Fogbow was trending number one on Facebook, was shown on the BBC News, BBC Weather, the Met Office and countless huge websites, PetaPixel, Fstoppers, Lad Bible, and Mashable being just some of them and only this morning, National Geographic in Australia and New Zealand showcased the image and story on their website although the story is due to be included in their Kids Magazine edition in February 2017. It was also featured in The Guardian, The Telegraph, The Independent, The Dail Mail, The Sunday Times, The Mirror, The Sun and it even made the front page of Scotland’s national newspaper The Scotsman. Jo and Geoff at Bav Media have worked tirelessly in promoting the story and I cannot thank them enough. If you think that you have a current photograph or a story that they might be interested in, please email Jo at jo@bavmedia.com

I still encounter on a daily basis, some very kind people messaging me videos and links to the story that is being broadcast and published on the various TV networks and national press from all over the world and I love how people write to me saying that they never knew fogbows existed. It really pleases me that people are discovering something new, something that captures their imagination. I cannot tell you how proud that makes me feel. A photograph with real weight behind it and more than an air of mystery to boot.

For those of you who do not know what a fogbow is. According to www.atoptics.co.uk Fogbows form in the same way as rainbows. A small fraction of the light entering droplets is internally reflected once and emerges to form a large circle opposite the sun. But beyond that, there are major differences. Rainbows are formed by raindrops which are so large that rays passing through them follow well defined ‘geometrical optics’ paths. Fogbows are formed by much smaller cloud and fog droplets which diffract light extensively. The emergent light is mostly deviated 135 to 150° from its incident direction to produce the main fogbow of 30 – 45° radius on the antisolar point. Fogbows are almost white with faint reds on the outside and blues inside. The colours are so washed out because the bow in each colour is very broad and the colours overlap.

And so that is that. Capturing a photograph like Fogbow has taught me many lessons over these past three weeks, all of them very useful and I have felt so much love and support from those who have contacted me personally, left wonderful messages and comments on the various social media sites that I have felt incredibly lucky. So a HUGE THANK YOU to you all. I genuinely appreciate the support.


I also have ‘Fogbow’ limited edition aluminium prints for sale